Did you know there’s more to dog shows than trips around the ring? Beyond seeing which dog is the best example of the breed standard, many dog shows have specialty competitions that show off a particular skill such as agility or herding. This month, Eukanuba Field was delighted to host the Belgian Sheepdog Club of America (BSCA)’s National Specialty and their Messenger Dog evaluation. 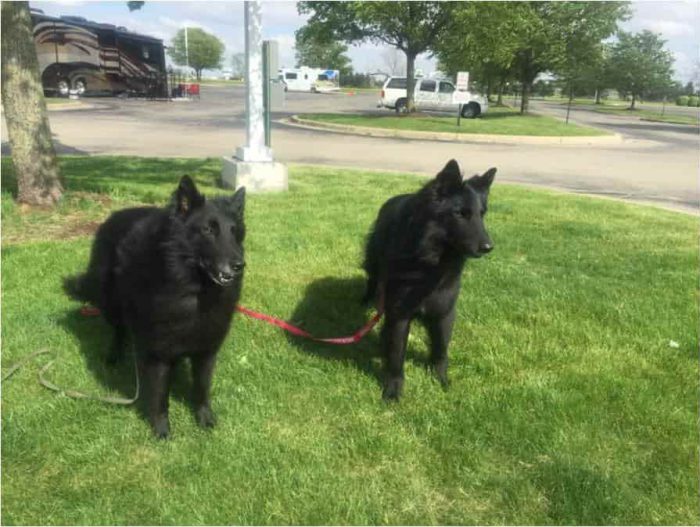 2017 is the 100th anniversary of the United Stated entering World War I. This subsequently also commemorates the 100th anniversary of the Beligan Sheepdogs working with American troops. Even before the U.S. entered the war, the dogs worked along side French and Belgian troops. These dogs would embed with troops in the trenches and transport messages between units either attached to worn collars, harnesses or within their mouths.

The dogs were used so prolifically during the war that the fighting, combined with other war time hardships for non-supporting dogs, almost decimated the population. Careful breeding post-war ensured this breed continues to modern day.

There are two levels of Messenger Dog – Future Messenger and Junior Messenger. Future Messenger Dog (FMD) is the first level of evaluation. The participating canine must first demonstrate an understanding of heeling and walking with their handler, including stays and turns in a Basic Control Exercise. They must then hold a selected sit or down position in the Honor exercise while another team works around them. The next portion is Search Exercise where the participating dog must find a treat or toy within boxes. In the final portion, Messenger Runs, the participating dog is “sent” to another handler a distance away, and is “sent” back to the original handler.

A handler may enter a dog in the Junior Messenger Dog (JMD) evaluation without the FMD. Similar to the FMD, the JMD begins with Basic Control.

“Future (MD) is on leash. Junior (MD) involves off-leash obedience work and the Messenger portion is more complex; they must find a handler that his hidden behind a blind or cover and run across unusual terrain like a tarp, ditch, or another physical or visual component,” explained Brown.

Fifteen dogs participated in the FMD and 3 in the Junior assessment during the BSCA’s National Specialty evaluation. “These handlers are not just interested in the title (of FMD or JMD) for their dog,” said Brown, “but also to pay homage to the historical aspect of the breed.”

Although the FMD evaluation is only performed through the BSCA, Brown urges anyone with an interest in the evaluation to seek out a local club to find classes and evaluations. “I got involved with Messenger Dog because of search and rescue work,” said Brown. “I’m also a big history buff and the ties this has to the history of the breed. I don’t want to see this facet of the breed disappear.”