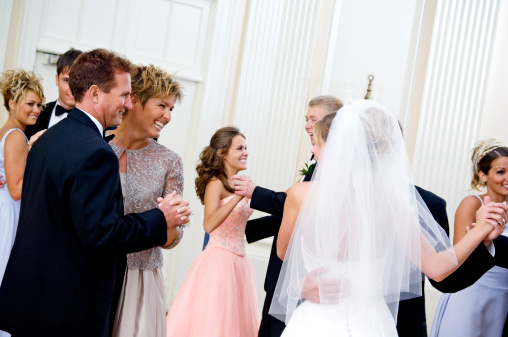 Considering skipping the bouquet toss at your wedding? Many modern brides are ditching this tradition of tossing a bouquet altogether in search of new variations and interpretations. Many women see the bouquet toss as pressure, and dislike the implication that single women are chomping at the bit to be married. There are several alternatives to the traditional bridal bouquet toss that will make everyone happy! Some traditions were meant to be broken.

In lieu of a bouquet toss, do an anniversary dance. This is probably the most popular bouquet toss alternative, and involves some emcee work from your wedding DJ. Inviting all of the married couples to the floor and throughout the song, the DJ politely eliminates the couples based on length of time married.  At the end of the song the couple that has been married the longest receives the bouquet from the bride. Engaging and celebrating your married guests has become a new modern tradition.

Instead of throwing the bouquet, some brides opt to present their flowers to their mother or another special person as a token of their appreciation.  This can be a really sweet moment, and a very nice touch. Or the bride may split the bouquet into two halves and give one half to her mother and one to the mother-in-law. The bridal bouquet could also be presented to grandparents, split apart for all the women in the bridal party, presented to the maid of honor, sisters or a friend who is newly engaged. Giving the bouquet to a special friend or relative will be a lasting memory for the recipient.

Throw the Bouquet to All Women

It is not unusual for a modern day bouquet toss to include both unmarried and married women, without the garter toss.  Tossing it to all of the women eliminates the “stigma” issue, and still allows you to include the tradition at your wedding. Including all of your female guests in the bouquet toss creates a fun experience for everyone with out singling anyone out.

One bouquet splitting into several parts! While this kind of bouquet (also known as a fortune bouquet) hasn’t quite made a famed name for itself in the wedding world, it’s definitely a trend growing in popularity. One bouquet splitting into several parts allows multiple women to feel like they have won a piece of the prize. A bride may also want to coordinate with the florist and attach charms, fortunes and good luck ribbons to the stems. A bouquet that breaks into several parts with attached notes and charms allows multiple guests to walk away with something special.

Depending on the guests at your wedding, the tradition of the bride tossing a bouquet can certainly be a fun part of the evening. That said, the decision to toss, or not to toss is a personal decision. After all it’s your wedding celebration!

Roberts Centre is home to the region's largest convention center, a luxurious Holiday Inn hotel, and Ralph's American Grill. The flexibility of our space, combined with our location between three major cities in Ohio, makes us the perfect venue for weddings, banquets, meetings, pet shows, and other special events.